BYU Alum Honored as Romney Institute Administrator of the Year 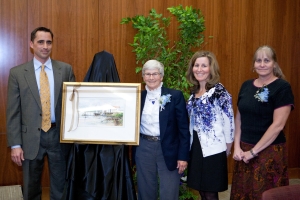 (l to r) MPA director, David Hart, presents a watercolor painting to Dell Keys (John Keys’ wife), and their daughters Robin Fisher and Kathe White.PROVO, Utah – Apr 4, 2011 – The Romney Institute of Public Management at Brigham Young University honored the late John W. Keys III as its 2011 Administrator of the Year. Keys was the former commissioner for the Department of Interior's Bureau of Reclamation, which manages, develops and protects the water resources in the western United States.

Before his death in 2008, Keys was an exemplar of dedication, vision and integrity. According to the Administrator of the Year selection committee, he exemplified the mission of the Romney Institute, making him the clear choice as the 40th recipient of this award.

"When I was informed John had been chosen for the award, I said ‘he hasn't administered anything in quite a few years,'" recalls Keys' wife, Dell. "The committee responded saying it was a unanimous decision for John to receive the award. We're very pleased with this honor and I know he would be too."

Keys was a native of Sheffield, Ala. He earned his BS in civil engineering from Georgia Institute of Technology in 1964. After graduation, Keys began his lifelong career working for the Bureau of Reclamation. While working as a hydraulic engineer, he earned his master's degree in water resources engineering from BYU in 1971. 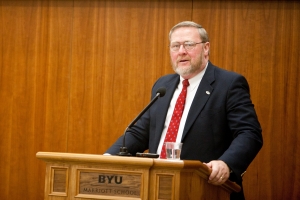 Bill McDonald, retired deputy commissioner and former Pacific Northwest director for the Bureau of Reclamation, shares some of his experiences with John Keys at the Administrator of the Year award banquet. Keys continued with his career and went on to serve as Northwest director for twelve years before retiring in Moab, Utah. After three years of retirement, he was invited by President George W. Bush to be commissioner in 2001. In this role, Keys managed the water systems for more than 31 million people in 17 states.

Bill McDonald, retired deputy commissioner and former Pacific Northwest director for the Bureau of Reclamation, shared some of his experiences with Keys during the Administrator of the Year awards banquet.

"John regarded public service, as do I, as an honor and privilege that should never be tarnished by personal gain or aggrandizement, nor by cutting any corners," McDonald says. "In his every action he showed us that we must always take the high road as public servants, doing the right thing for the right reason."

According to McDonald, Keys had a knack for remembering names and made it a point to show a vested interest in the lives of his employees. One of the ways Keys demonstrated his genuine interest was by sending thank you notes, get well cards and postcards. McDonald says many of these personal notes can still be found hanging on the walls of John's former employees.

"John's leadership as a public servant and administrator is marked not by what he accomplished as an engineer or a senior executive, but by how he made the employees that worked for him feel and how each wanted to do their best for him," McDonald says. "If you are to be a great leader, you will care about your fellow employees — you will know their stories, not just their names."

Keys joins the ranks of other distinguished individuals who have received the Administrator of the Year award. It has been presented since 1972; recipients include former executive director of International City/County Management Association William H. Hansell, former Commissioner of Church Education Neal A. Maxwell and former CFO of the Environmental Protection Agency Charlie E. Johnson.