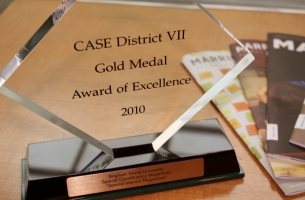 PROVO, Utah – Mar 21, 2011 – Good communicators are supposed to work behind the scenes, but sometimes they can't help getting pulled on stage for a successful effort. Such was the case when the Marriott School of Management won multiple awards for communications excellence from the Council for Advancement and Support of Education.

"Winning these awards is a testament to the talent and hard work of our communications team," says Gary Cornia, dean of the Marriott School. "I'm convinced that having a strong communications arm is an essential element to being a top-rated business school."

Marriott Alumni Magazine won a gold Award of Excellence in the Special Interest Magazines category. The magazine, which underwent a facelift for the fall 2010 issue, is distributed three times a year to more than 46,500 alumni and friends.

The Marriott School also received bronze awards in the Excellence in News Writing and Editorial Design categories. The design award was earned for "Christian Vuissa — The Leading Man", which appeared in the summer 2010 Marriott Alumni Magazine.

Entries are judged by a team of experts from around the country on creativity, quality, innovation and professionalism. The Marriott School competed against universities and colleges in Arizona, California, Guam, Hawaii, Nevada, Northern Mariana Islands and Utah. The awards were handed out at the CASE District VII meeting 4 March in Los Angeles.

"We're grateful for this affirmation of the quality of our alumni magazine," says Joseph Ogden, assistant dean and managing editor of Marriott Alumni Magazine. "Our goal is to provide highly engaging and useful information about business trends, management practices and strong character development.