Mayor Ralph Becker encourages students to serve.PROVO, Utah – Feb 7, 2011 – For soon-to-be graduates attempting to join the workforce in a weak economy, knowing the right people is more pertinent than ever. To help students interested in government prepare to enter the field of public service, the Romney Institute of Public Management held its second local government fair with more than a dozen governmental entities in attendance.

In addition to the learning experiences available through potential internships, students were able to gain insights into serving as an elected official from keynote speaker Ralph Becker, mayor of Salt Lake City. Becker encouraged students to make a difference in the public sector.

"For many of you, a sense of service has guided you to pursuing the degree that you have and I applaud you for that," Becker says. "We desperately need you. And I hope that you can have as meaningful and satisfying career as I've had."

Students across campus who attended the fair took a sizeable step in the right direction to having a career in local government. Six of the representatives interviewed students for internship and full-time job positions. Eleven city governments were represented from five northern Utah counties including: Davis, Salt Lake, Summit, Utah and Wasatch. Four governmental entities from Utah along with Harris County in Texas were also in attendance.

According to Andrew Nelson, student director of the fair, a larger fair presents more opportunities for networking-savvy students and employers to make crucial contacts. 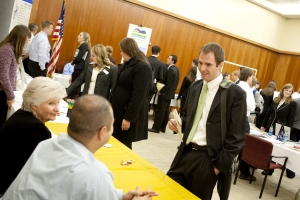 Students speak with representatives about internship and employment opportunities."We nearly doubled participation from cities or government organizations and held many more interviews than last year," says Nelson, a first-year MPA student from Las Vegas. "The feedback we received from professional participants was overwhelmingly supportive. We are hoping to make this event the premier recruiting fair for local government positions in the intermountain West."