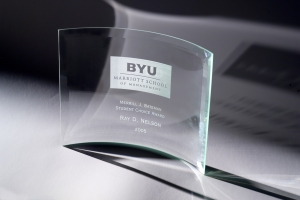 PROVO, Utah — May 02, 2005 — Students at Brigham Young University’s Marriott School of Management selected two of their classmates and a professor to receive the 2005 Merrill J. Bateman Awards – the only school-wide awards selected entirely by students.

Nominated by their colleagues, the Merrill J. Bateman Outstanding Student Awards are based on community service, student leadership and extracurricular involvement. The Merrill J. Bateman Student Choice Award is given to a faculty, staff or administrator who has demonstrated outstanding efforts to assist and enhance students’ experiences at the Marriott School. The awards, now in their fourth year, recognize mentoring, involvement in student activities and exemplary leadership.

Dougall, was the 2004-2005 president of Beta Alpha Psi, and oversaw VITA, one of the largest IRS-sponsored volunteer income tax assistance programs in the nation. She was also president of the Accounting Club for two years and represented BYU on one of the top xTAX competition teams.

Professor Nelson, associate professor of managerial economics, received his Ph.D. in 1981 from the University of California, Berkeley. He came to BYU in 1985 and teaches courses in managerial economics and forecasting. He has also taught for the Department of Agricultural Economics at the University of California, Davis, and has been assistant economist in the Giannini Foundation. His recent publications deal with agricultural economics and futures markets.