Former Governor Recognized as Administrator of the Year 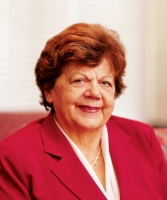 PROVO, Utah — Apr 19, 2005 — Brigham Young University’s Romney Institute of Public Management named Olene S. Walker, former governor of Utah, as the 2005 Administrator of the Year. A scholarship was also founded in her honor.

“Through my years of involvement in the private sector, in the public sector and with my family, I have found that money, fame, and power do not bring happiness,” Walker told guests at a banquet in her honor. “In the long run it is how we live our lives on a daily basis, how we treat other individuals, the routine decisions that establish who we are and what our reputation is.”

Olene S. Walker was sworn in as Utah’s 15th governor on Nov. 5, 2003 — the first woman to hold that office. She also served as Utah’s first woman lieutenant governor, where she spearheaded many important initiatives including education programs, budget security measures, healthcare reform and workforce development.

Governor Walker was also a leader in the Utah House of Representatives where she served as majority whip. She has chaired the National Conference of Lieutenant Governors and is a past president of the National Association of Secretaries of State.

Walker was born in Ogden, Utah. She earned her bachelor’s, master’s, and doctorate degrees from Brigham Young University, Stanford University, and the University of Utah, respectively. She currently is a member of the Marriott School National Advisory Council.

The Romney Institute has presented the Administrator of the Year Award annually since 1972. Institute faculty nominate and select an outstanding man or woman who has achieved distinction after many years in public sector management. Past recipients include: Charlie E. Johnson, CFO of the Environmental Protection Agency; Neal A. Maxwell, former commissioner of education for The Church of Jesus Christ of Latter-day Saints; and Elliot Richardson, Former U.S. Attorney General and Secretary of Treasury.

The Romney Institute of Public Management is part of Brigham Young University’s Marriott School of Management. The institute was named in 1998 for three-term Michigan Governor George W. Romney. The Romney Institute offers a master’s degree in public administration through both pre-service and executive programs. The institute has a long tradition of preparing young people for careers in public service and is dedicated to educating men and women of faith, character and professional ability who will become outstanding managers and leaders in public and not-for-profit institutions.