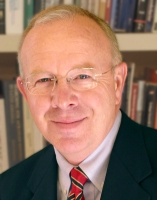 Gloria Wheeler, a professor of public management, will remain as associate director of the Romney Institute, a position she has held for 10 years.

Cornia is the past president of the National Tax Association and has published a number of articles on tax policy in leading academic journals. He is a former commissioner of the Utah State Tax Commission and was chair of Utah Governor Mike Leavitt’s Tax Review Commission.

“I’m especially pleased that Gloria Wheeler has remained as associate director,” Cornia says. “I’m excited about the new challenge and opportunity, and I hope that I can live up to the expectations of my predecessors. In their individual ways they’ve all strengthened the Romney Institute.”

Parsons is the NAC Professor of Public Management. Under his tenure, the Romney Institute has increased the size of its applicant pool, brought in a full-time person to lead student placement, strengthened ties with alumni and outside groups, built its endowment and hired five faculty members.

“Bob has been an outstanding leader of the Romney Institute; he’s been a joy to work with,” says Dean Ned C. Hill. “Gary will serve with distinction and his international reputation will bring much credit to the school and the institute.”