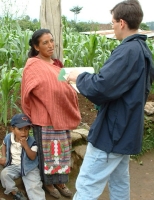 PROVO, Utah — Dec 12, 2003 — Brigham Young University professor Warner Woodworth and MPA student Shon Hiatt received the Best Paper Award for the Business Division at the 2003 Utah Academy of Sciences, Arts and Letters Conference. Their paper, “Socioeconomic Impacts of Microfinance in Mexico and Ecuador,” will be published in an upcoming issue of Utah Academy Journal.

“The whole purpose of the research was to put more empirical data ‘on the street,’” Hiatt says. “Hopefully, research like this will influence organizations to use their money effectively—like in microfinance efforts—not just deplete resources in large-scale activities that result in little or no improvement.”

Woodworth, a professor of organizational leadership and strategy at BYU’s Marriott School of Management, teamed up with Hiatt to research the impact of microfinance and economic development in Latin America, specifically Mexico and Ecuador. Through microfinance, the “poorest of the poor” receive small loans to start their own businesses, working toward the goal of providing for their families and achieving economic self-reliance. The paper describes the partnership with an anonymous non-governmental organization the authors refer to as “Latino Finance,” a non-profit group with programs in 24 countries.

Through funding from Latino Finance, Hiatt worked as a field researcher in summer 2002 traveling to Mexico and Ecuador to conduct personal interviews with 889 “borrowers” or microentrepreneurs. Outcomes of his interviews, described in the paper, demonstrate the impact of microcredit among poor families. The study shows that microenterprise businesses that had been going longer and had received several loans, each loan bigger than the previous, were stronger than newer start-up businesses. Additionally, borrowers participating in the microcredit program were economically better off—demonstrating the effectiveness of the microfinance project.

Hiatt and Woodworth worked together to develop and publish the paper. They have presented their research in Paris and Ireland.

“This is just the beginning,” Woodworth says. “We need this research in more countries. We’re part of a new dimension of microfinance—impact assessment—how to get a bigger bang for the buck. This research gives credibility to NGOs like Latino Finance when we find positive correlations as well as occasional failures.”

Hiatt says the mentoring relationship he has with Woodworth is not only educationally enriching but also helps his credentials for doctoral programs. “The in-class instruction at the Marriott School is outstanding,” Hiatt says. “But working side-by-side with Professor Woodworth, a true pioneer in the microfinance movement, has been a highlight.”