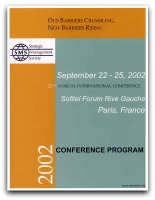 The best paper prize was awarded to Marriott School strategy professors Mark H. Hansen and Lee T. Perry and BYU statistics professors C. Shane Reese and Gilbert W. Fellingham for their paper, “A Bayesian Application of the Resource-Based View: Narrowing the Gap Between Theory and Practice.”

“We had a lot of confidence that the theory and methods we developed were revolutionary,” says Perry. “But, we were surprised to win.”

Other finalists for best paper came from top strategy schools including Harvard, INSEAD, and The University of Pennsylvania’s Wharton School. SMS narrowed best paper selection from more than 600 abstracts to 10 papers presented at the conference.

“One of our early challenges was to identify a statistical model consistent with our theory,” Hansen says. “That’s where the statisticians became invaluable. We also received tremendous technical support from the Marriott School staff.”

The BYU researchers developed an advanced statistical model—which strengthens the popular resource-based view of the firm—that can be used to predict the consequences of an organization’s decisions on a firm’s financial performance.

For example, the model allows strategists to predict the financial impact of such decisions as organizational restructuring, layoffs, hiring, and acquisitions.

“The revolutionary part of the research is that our method allows us to do analysis at the firm level rather than aggregating data across many companies,” says Perry.

“We also argued to revise traditional Resource-Based Theory by asserting that resources in and of themselves are not the primary source of competitive advantage. The advantage is found in what managers can do with a firm’s resources,” Hansen explains. “Conceivably, two firms with the same resources could end up with very different results.”

The Marriott School is located at Brigham Young University, the largest privately owned, church-sponsored university in the United States. The school has nationally recognized programs in accounting, business management, public management, information systems, organizational behavior and entrepreneurship. The school’s mission is to prepare men and women of faith, character and professional ability for positions of leadership throughout the world. Approximately 3,000 students are enrolled at the Marriott School’s graduate and undergraduate programs.