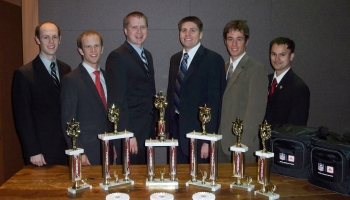 From L to R: Reed Olsen, Dave Wilson, Robert Mount,
Devin Collier, Landon Cope and Bryce Clark stand
with the awards they won at the competition.PROVO, Utah – Jun 24, 2009 – Brigham Young University information systems students reeled in eight awards this spring with their problem-solving strategies and technological expertise at the National Collegiate Conference for the Association for Information Technology Professionals in Oklahoma City.

While most teams only registered for two to three competitions, BYU's teams signed up for all six time slots. This schedule made the competition even more rigorous with some students spending as many as 13 hours competing in a single day.

"The entire competition was a test of mental endurance," says Olsen. "After eight hours of competing, I could hardly think straight. However, we just pushed through for the remaining five hours of the contests and it paid off."