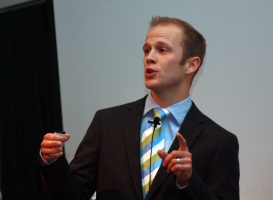 More than 150 students gained hands-on experience using Omniture's SiteCatalyst software to analyze online traffic and how consumers shop at Overstock.com during the two-week competition. They then prepared a presentation for Omniture executives on how Overstock.com could optimize the shopping experience and increase profits.

"The OWAC gives students the opportunity to participate in a competition that closely resembles a situation faced in the real world by marketing and strategic consultants," says Thomas Gosney, student lead of the competition. "This opportunity prepares students for future situations and tests their ability to work in a difficult and stressful environment."

Group X put in long hours to pull off a victory in the competition. With only two weeks between the competition kick-off and the submission deadline, Olsen and Wilson spent a total of 70 hours preparing their recommendations.

"We have complementary skills that allowed us to work really well together and made the presentation cohesive," Olsen says.

Of the 85 teams that entered the competition, 22 teams presented in the preliminaries and only four made it to the finals held in the Tanner Building where they presented in front of three judges from Omniture.

The team Lost Cousins placed second and received a $5,000 award. The third place team, Analysts on Demand, received $2,500 for their project.

The Omniture Web Analytics Competition is held twice a year. The next competition will take place during winter semester 2009 and is open to all BYU students.