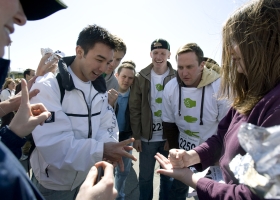 Students throw down scissors and rock at the record-breaking tournament at BYU.

Last year’s event set a record for the largest tournament of its kind with more than 500 participants. This year’s competition on April 11 attracted 826 people, enough to set a new world record, pending certification from Guinness.

“We are very excited about the mission of Enterprise Mentors International because it focuses on helping entrepreneurs around the world succeed in their ventures,” says Derek Pando, BYU CEO president. “By donating a portion of participants’ registration fees to EMI, we hope to bring awareness to this cause and spark students’ interest in entrepreneurship.”

As an additional way of promoting entrepreneurship, the competition was sponsored by Omniture, a leading provider of online business optimization software, which was co-founded by a former BYU CEO president, Josh James.

“Entrepreneurship is fundamentally about believing in ourselves,” says John Mellor, executive vice president of business development and corporate strategy at Omniture. “In sponsoring this event, we wanted students to ask themselves, ‘Why not me?’ Somebody is going to start the next great company, why not BYU students?”

The BYU Collegiate Entrepreneurs’ Organization promotes and encourages entrepreneurship among students. The organization also assists current student entrepreneurs in their ventures through annual events and competitions.