Students use business to better the world 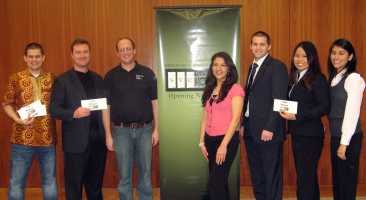 First, second and third place teams at the Social Venture Competition were honored with more than $50,000 for their bright ideas for how to use business skills to better the world.PROVO, Utah – Apr 15, 2011 – According to finalists at the 2011 Social Venture Competition, solving a few of the world's problems is possible — use tutoring, technology and tilapia. The competition, hosted by the Ballard Center for Economic Self-Reliance, challenged students to create innovative solutions to social concerns, such as those in education, volunteering and agriculture, and honored finalists with more than $50,000.

Tilapiana, a program for fish-farming franchises in Ghana, took first place and received $10,000, plus and an extra $3,000 as the audience-choice award winner. The name Tilapiana comes from the tilapia fish, one of the most popular varieties in fish farming.

According to Justin King, co-founder of Tilapiana, Ghana has experienced an 80 percent decline in marine stocks and currently produces less than half of the country's demand for fish. Tilapiana's solution leverages local production and distribution so Ghanaians can grow their own fish, sell them and feed their families in a sustainable way.

"Although fish farming is done around the world, there's not much in Africa," says King, a second-year MBA student from Kaysville, Utah. "It's a fairly new industry, and Ghana has passed recent laws and initiatives because they want this to be their next big economic stimulant."

Fellow co-founder Andrew Steward, a second-year MBA student from South Jordan, Utah, and Janice Kirk, a first-year MBA student from Blanding, Utah, have also been essential to Tilapiana's success. The organization plans to expand its fish-farming model to five countries in Africa within five years.

Aaron Miller, faculty director of the competition, says students at the SVC combine their passions for business and bettering the world; their ideas are too good to leave unrecognized.

"BYU is a leader in social entrepreneurship among universities in the United States," Miller says. "Most social venture competitions pool applicants from multiple schools. The fact that we can sustain such high quality ventures every year with BYU students alone is pretty remarkable."

The second place team, TeensACT, won $4,000 for their program that empowers teens for college. The program decreases the dropout rate of students by offering ACT prep courses, guest speakers, campus tours and assistance in finding and applying for scholarships. In the last year they've had remarkable success sending high schoolers on to higher education. The momentum will likely continue, as colleges across the nation are requesting their program.

"There's a passion and a demand for the program and that's what helped me to know from square one that TeensACT was going to succeed," says Tory Norman, a second-year MAcc student from Fairview, Utah, working on the project.

Stratus, a software program that connects businesses with nonprofits, took third at the SVC and received $1,000. According to founder Adam Norton, a senior studying entrepreneurship from Bellville, Ark., the program pairs employees' skills with nonprofits' needs to make a perfect match.

And as the announcer of the competition added, "Stratus is going to change the way businesses and nonprofits work together. Just you watch."

The three finalists are also eligible for additional mentoring through the Ballard Center. The Center awards each team an extra $12,000 upon meeting benchmarks throughout the year.