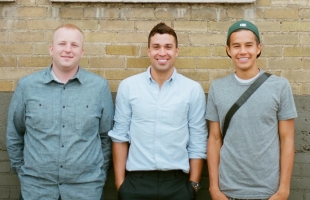 Kirk Ouimet, Jiovan Melendez and Garrett Gee pose outside the Provo Scan office.Scan, Inc., the fresh startup created by a group of BYU students, recently raised more than $1.7 million in seed funding. Not bad for a company that started a little more than a year ago.

What does this mean for the young company?

It means better technology — including near field communication (NFC) and image recognition — and an infusion of talent to develop mobile apps and mobile technologies.

But getting the funding was not an easy road.

In March 2011, Garrett Gee, cofounder of Scan, camped outside an Apple Store and handed out Scan App business cards to the 600+ people waiting in line. In May he visited numerous venture capitalists in California — many of which didn't let him past the front desk.

"Initially investors came to us because of our hot product and great traction," says Jiovan Meledez, the head of product at Scan. "We flew out to San Francisco 20 plus times — every time we met with investors who liked what we were doing, they referred us to other investors to pitch to."

Finally, the hard work paid off during the summer when the same venture capitalists he was hoping to visit with formally asked to meet with Gee.

"More than anything, it was a matter of proving to our VCs that we were not only capable of providing them with an impressive product, but that we also had the vision to make it into something that would last," Gee says.

The company, which was recently included in Inc.'s list of "Coolest College Startups 2012," was started by cofounders Gee, Ben Turley and Kirk Ouimet. The students all met at a BYU Web startup group meeting and decided to formulate a business plan based on Gee's idea of generating the unique squares. The company took second at the BYU Business Plan Competition in 2011 under its previous name, QR Code City.

Since its launch, the app — which is available for both iOS and Android — has been downloaded more than 10 million times and is being used in more than 77 countries. Today, more than 3,500 businesses are running their QR campaigns on the Scan website.

Scan's unique features and customer service make it stand out from competitors. One particular feature is Scan Pages, user-friendly mobile websites accessible by custom QR Code or short URL. Scan Pages allow businesses and individuals to quickly and easily create a mobile site by bringing together branding, social media, videos and blogs in one place. Scan also provides analytics that can be accessed through the user's account.

"We focus more on design and user experience," Melendez says. "This has played a huge role in our growth of 10 million users in under a year faster than any other generator/QR code platform out there."