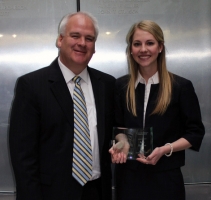 The Merrill J. Bateman Awards are given annually to students who serve and lead within the school and community; the Student Choice award is given to faculty, staff or administrators who demonstrate outstanding efforts to enhance students' experiences. This year a new category was added to recognize an outstanding student club or organization.

"I truly feel I'm among the best of the best today," says Michael J. Bateman who spoke on behalf of his father Merrill J. Bateman. "You're great examples of what it means to be leaders through the wonderful service you provide." 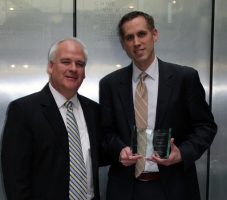 Michael Bateman with Mike Christensen, Outstanding Graduate Student award winner. In addition to the students and faculty awards given annually since 2002, the Outstanding Student Organization award was added this year. The Investment Banking Club was the first to receive this honor. This growing club strives to provide job opportunities for students in financial services. The club has received accolades for their organization and dedication in serving more than 400 members with weekly activities centered on preparing students to land a job on Wall Street through networking and résumé help.

Dr. William H. Baker was honored with the Student Choice award. Baker has worked at Brigham Young University for more than 41 years and has also helped students add value to their résumés by coaching several winning graduate and undergraduate teams in national and international case competitions.

At the ceremony, presenters shared comments from students who commended Baker for his scholarship and service.

"His example of service and discipleship has forged a pattern that I hope to follow throughout my life," one student stated. 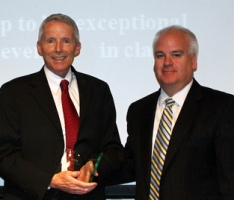 Christensen, an MBA student majoring in OBHR, received the Outstanding Graduate Student award. Christensen has also served his peers by running the MBA Sherpa program; a peer-led mentoring group that helps first-year MBA students secure internships. After graduation Christensen will begin working in a new capacity as an HR generalist with the Kellogg Company.

After the awards were given, Michael Bateman spoke about the qualities of leadership, encouraging the winners and nominees to continue on as selfless leaders.

"The time will fly over the next 25, 50 years," said Bateman, president and owner of BJO Capital Management Inc. "As you take these valuable tools you have received here at BYU you are going to make a significant difference in the world — we know that to 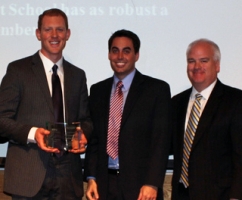 Austin Boaz and Jordan Hughes, co-presidents of the Investment Banking Club receive the Outstanding Student Organization award. be the case."

The Merrill J. Bateman Awards were created in 2002 in honor of Merrill J. Bateman, who served as president of BYU from 1996 to 2003 and as dean of the BYU School of Management from 1975 to 1979. He has held several prominent positions in The Church of Jesus Christ of Latter-day Saints. He served as a member of the Presidency of the Seventy and was president of the Provo Utah Temple from 2007 to 2010.