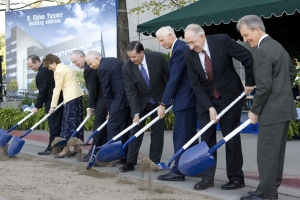 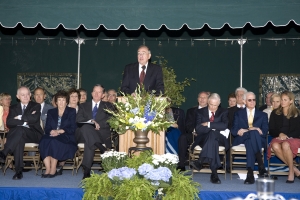 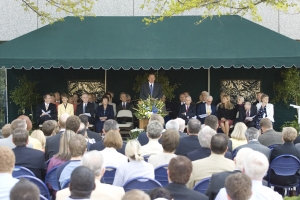 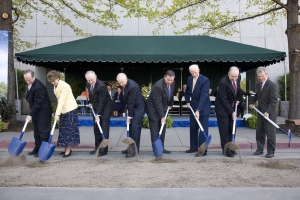 PROVO, Utah — Apr 30, 2007 — The planned addition to the N. Eldon Tanner Building is officially underway after ground was broken on the campus of Brigham Young University April 25.

The groundbreaking ceremony was conducted by President Cecil O. Samuelson, with Elder W. Rolfe Kerr of the Seventy and Commissioner of Church Education, presiding over activities. Elder J. Willard Marriott, Jr. and Richard E. Marriott as well as members of the N. Eldon Tanner family were in attendance along with members of the Marriott School National Advisory Council, faculty, students and other guests.

“The addition is greatly needed,” said Ned C. Hill, dean of the Marriott School. “Enrollment in our programs has grown by more than 50 percent since the Tanner Building was completed nearly 25 years ago. The expansion will add 76,000 square feet of space to better serve our students and to enhance the learning environment with state-of-the art teaching facilities and plenty of individual and group study areas.”

The Tanner Building was completed in late 1982 and dedicated on April 5, 1983 by President Gordon B. Hinckley and houses the Marriott School of Management, one of the largest colleges on campus. The new facility will be used to meet the growing demands of the Marriott School and the campus community.

“My father was always anxious to provide opportunities for other young people to get an education as he did. This is why Dick and I continue to direct our father and mother’s foundation, to invest so heavily in education, especially here at Brigham Young University,” said J. Willard Marriott, Jr., president and chair of Marriott International, Inc. “We’re very proud to have our name associated with this school and with this great university.”

The Four-Story Tanner Addition will house:

The Tanner Building Addition project also includes a three-level, open-air parking structure to be constructed directly north of the existing building. The addition and parking structure are expected to be completed by the end of August 2008.