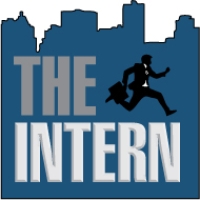 The competition, loosely based on the popular TV show “The Apprentice,” showcased participants’ interviewing and presenting in front of an audience. Contestants were asked to give a one-minute presentation about themselves and their qualifications. Following a brief questioning period, a panel of judges rated each contestant on a scale from one to ten and announced six winners after a final deliberation.

“The great thing about the competition was that it didn’t take as long as most internship applications,” says winner Ashley Kehl, a marketing major from Salt Lake City. “The judges were also able to see us onstage and observe how we presented ourselves and reacted to certain questions. It let our personalities show through and helped them decide who would be a good fit for their companies.”

Students who are familiar with the internship process know that applications and hiring procedures can be long and arduous. But for students like Kehl, the competition introduced a more interpersonal approach. The judges, taken from the school’s undergraduate advisory board, conducted phone interviews with 30 applicants before narrowing the field to 13. Those finalists made their cases face-to-face with the judges during the finals, which were held in the Tanner Building.

“This was different from other conventional internship applications in that decisions were done faster, based on interviews done earlier in the week and the judges’ impressions during the event,” says Matt Smith, director of human resources training and development at BYU, who served as a judge. “Typically, an intern applicant will wait for weeks to see if he or she is even being considered. Aside from that, I thought the competition was a fun change of pace. Each of the candidates took the contest in the spirit of fun but also as a real competition.”

“I was impressed with the caliber of students who applied,” adds panel judge Mary Carlston, director of finance for Sperry Van Ness Equities, LLC. “I would have hired any one of the candidates and been happy. They were all excellent. Our main goal, though, was more to raise general awareness of how valuable an internship is for every student.”