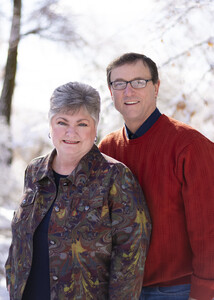 Russell and Wendy met at BYU in graduate school where they both pursued a Master in Public Administration, graduating in 1986. They formed a study group at the beginning of the program, stayed together for both years, and decided to get married in August 1986.

Russ was born and raised in Ogden, Utah and earned a BA in Business Administration from Weber State University. Wendy was born in Salt Lake City, Utah, but moved around to Utah, Nevada, California and Texas. She earned a BS in Psychology from BYU.

Professionally, Russ worked 25 years in city government working in Economic Development, Public Works, Administration, and Budgeting, eventually retiring from the City of Palmdale as the Director of Parks and Recreation and Special Events. Before having children, Wendy was a human resource manager and worked for the State of California Employment Development Department managing a professional networking program. She was blessed to be a stay-at-home mother once their third child was born. She did volunteer work in the community and in the various schools her children attended, eventually receiving the district Volunteer of the Year.

They are parents of four children, three of whom also graduated from BYU. In fact, their daughter Brittany is also an Alum of the MPA program, as well as being the mother of their first grandson.