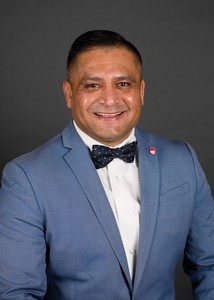 Jose is an El Salvadoran-born immigrant who grew up in East L.A. He credits much of his success to his mother who sacrificed to give his family a better life. He graduated from John Glenn H.S. in L.A. with a full-ride scholarship to wrestle at BYU where he obtained 3 degrees: a BA in Secondary Education Spanish, ESL Masters in Educational Leadership, and a PhD in Educational Leadership.

His previous positions include: Coordinator of Title III and Special Programs at the Utah State Office of Education, Director of Diversity for Alpine School District, 11 years as an Assistant Principal in Alpine and Provo school districts, and as a Spanish teacher for 3 years prior to that. He served a 2-year service LDS mission in Chicago, Illinois. He was appointed a commissioner on volunteerism by Lieutenant Governor Bell’s Utah Commission on Volunteers in 2010, and as a commissioner to the office Multicultural Affairs by Governor Herbert, 2012. He serves on the Board of Directors United Way of Salt Lake and Board of Directors of Intermountain Community Care Foundation and Granite Education Board of Directors.

Jose is living his dream as the CEO of Latinos in Action (LIA), a non-profit he built from the ground up in 2001, and which officially became a non-profit organization in 2010. LIA is currently implemented in over 200 schools across Utah, Idaho, Colorado, Illinois, Connecticut, California, Arizona, Nevada, Florida, New York, and Iowa. LIA empowers Latino youth to strengthen their communities through culturally responsive social emotional learning, college and career readiness, and leadership. In 2014, the White House Center for Excellence in Hispanic Education honored LIA as a Bright Spot. LIA was recently recognized by Governor Herbert and Envision Utah and given the Common Good Award for Excellence in Educational programming.

Jose is married to Jaymilyn Bonnett Enriquez and is the father of 6 children; 4 girls, two boys, and one grandson.