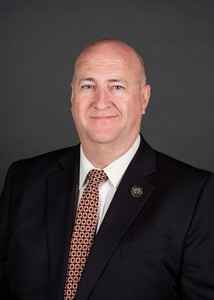 Armand Glick accepted his current position as the Director of the State of Utah Insurance Department Fraud Division in January of 2009. The fraud division is a law enforcement investigative agency that targets insurance fraud and associated financial crimes. Prior to this appointment, he worked 22 years for the Salt Lake County Sheriff’s Office where he retired as a Captain. During his tenure with the Sheriff’s Office, he served as Chief of Police Services for several contract cities, including Herriman, Riverton, and Bluffdale as well as many other positions during his career.

Armand graduated with his Masters of Public Administration from BYU in 2005. He also holds a Bachelor of Science in Criminal Justice with a minor in Psychology from Weber State University.

Armand and his wife Terryl live in Riverton Utah and are the proud parents of four children; a son who also graduated with his MPA from BYU and his wife who live in Washington D.C.; a son attending the University of Utah; a daughter and son in law living in Lehi with their first granddaughter; and a daughter who will be attending BYU Hawaii.