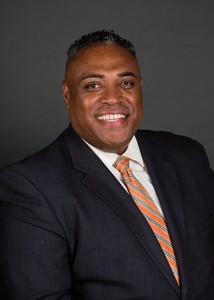 Peni Basalusalu was born and raised in Suva, the Capital City for the Republic Islands of Fiji. In 1994, Peni enrolled at BYU-Hawaii where he majored in Political Science. He took a break from school after his Freshman year to serve a full-time mission in Anaheim, CA. After, he returned to BYU-H where he met and married his wife of 22 years Amy Basalusalu in 1999. Peni graduated in 2000 and was awarded the International Student full-tuition scholarship to any graduate program at BYU-Provo. He chose the MPA program which he started in August of 2001.

Peni started his career in local government as an intern with the City of Orem, UT, during his second year in the MPA program. After graduating in 2003, he moved his family to Stockton, CA where he took up his first full-time position in local government as an Administrative Analyst. He has since served six other municipalities in the Bay Area and San Joaquin Valley of Northern California.

Peni and his wife Amy (BYU-H Class of 1998) were sealed in the Oakland, California Temple. They have four children, the first was born during his 2nd year in the MPA program. Originally from Fiji, Peni enjoys cooking with Fijian recipes. He is an avid supporter of any BYU sporting team and event. Peni played rugby for four years for BYU-H and two years for BYU Provo while in graduate school. He loves spending time with his children and supporting them in their games, musical performances, and camp outs. With his wife, he loves travelling, trying new places to eat, hosting friends and family and surprising their children with random road trips.

Peni has served in many callings in the Church of Jesus Christ of Latter-day Saints, and has been serving in the Stockton, CA Stake Presidency for the past 6 years. He enjoys doing service; both as a paid professional and as a community volunteer.