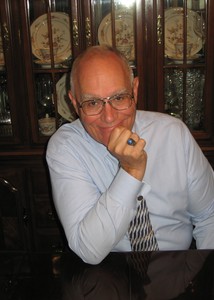 Marion J. (Sam) Hanson became involved in public affairs at age 18, when he won a seat on the Utah State Board of Education. After church missionary service in France, he attended the University of Utah, where he majored in French. In 1977, Sam married the former Rolayne Beckstrom—a published author and educator. They raised four sons, and now enjoy playing grandparents to four boys and three girls.

Sam attended the U of U, aspiring to become a high-school French teacher while working full-time for the Church of Jesus Christ of Latter-day Saints’ Security Department. Following a promotion, Sam enrolled in the BYU EMPA program and graduated in April 1990. After the 2002 Winter Olympics, Sam returned to the U of U to follow his original dream. He earned a teaching certificateꟷand a second bachelor’s degree in English. Hired by the White Pine County Nevada School District, Sam and Rolayne enjoyed teaching and rural life in Nevada and retired in August 2018.

Sam used his EMPA knowledge and skills to run and earn a seat on the Ely Nevada City Council in June 2013, and was re-elected—running unopposed—in June 2017. He also served as Mayor Pro-tem of that body.

Sam and Rolayne have been active adult leaders in the Boy Scouts of America and participated in several Wood Badge training courses; they enjoy reading, gardening, kayaking, traveling, trailer camping, ultimately moving to Hurricane, Utah in 2019.