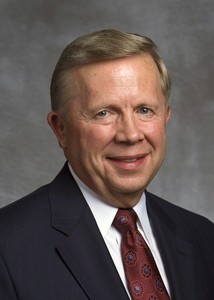 Larry was, until 2007, the Senior Executive VP and CTO for Henry Schein, Inc., a Fortune 500 company. They are the largest provider of healthcare supplies and services to office-based practitioners in the combined North American and European markets. His company, Dentrix, merged with Henry Schein Corporation in 1997 and is now part of their Technology Division of which he was President for several years. Dentrix has been recognized twice in the top 70 of the Inc. 500 fastest growing companies in the U.S. In addition, it is the only company to have been recognized nine times in the “Utah 100” fastest growing companies. Larry was selected as “Entrepreneur of the Year” finalist for the state of Utah in 1997. He and his late wife, Shirley, are the parents of six children and the proud grandparents of 41 grandchildren and 4 great grandchildren. He served in the Young Men General Presidency of the Church of Jesus Christ of Latter-day Saints from April 2009 to April 2015. He has served as the President of the Utah National Parks Council, President of the Western Region, and on the National Executive Committee and Executive Board of BSA. He currently serves on the Executive Committee and Board of Hale Centre Theatre and will be the President of the National Society of the Sons of Utah Pioneers beginning September 2021.