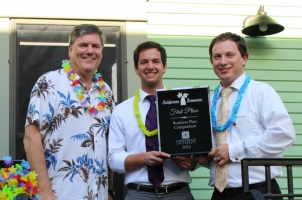 AutoBid team members Jordan Furniss and Taylor Moss receive the first-place award at the California Dreamin’ Competition.PROVO, Utah – Aug 6, 2012 – Brigham Young University students know what it takes to create a successful company, and they have the results to prove it.

Student entrepreneur teams from BYU collected an impressive lineup of business competition wins this spring. Altogether, seven student teams presented their businesses in 10 invitational events across the country, with most making it to the semifinal and final rounds of the competitions.

One big winner was BYU student team AutoBid, which won first place at the 2012 California Dreamin' Business Plan Competition, hosted by Chapman University in Orange County, Calif. In the competition, AutoBid competed against teams from 17 Western universities and walked away with $50,000 in cash.

"During the California Dreamin' BPC, I realized how well BYU had prepared us for these various competitions," says Jordan Furniss, Autobid co-founder and a senior studying entrepreneurship from Idaho Falls, Idaho. "We were taught how to present as an actual, operating company. One thing that set us apart was that we were more than just a plan on paper. Rather, we were in the industry creating value for our customers."

Another BYU team that excelled at competitions was Active Alarm. The team took first place at the Utah Entrepreneur Challenge in April at the University of Utah where it won $50,000 in cash and in-kind prizes. Active Alarm also took third place at the Venture Challenge held at San Diego State University. The company developed a shut-off device linked to a smoke detector that prevents house fires by cutting power to the stove or oven.

"Competitions definitely provide us with exposure. We've had a lot of people coming up to us after them, interested in investing and funding," says Rhett Weller, a recent MBA graduate from Eden, Utah, who manages the business operations for Active Alarm.

In addition to these top finishes, BYU teams FlexLeg and Bladepad took second and fourth place, respectively, at Wake Forest's Elevator Competition in March. Students from schools across the globe tested their skills pitching their companies to venture capitalists. If the team generated sufficient interest, it advanced to the next round where a formal boardroom presentation was made. FlexLeg also won the fan vote.

"At the competition people were commenting that BYU wins the fan vote every year because of its dynamic network," says Seth Gonzalez, FlexLeg partner and an MBA graduate from Pleasant Grove, Utah. "We have a unique network at BYU that allows us to accomplish some really incredible things."

In Texas, BYU teams PhoneSoap and Bladepad, made it to the semifinal round of the Rice Business Plan Competition, one of the world's largest business plan competitions. PhoneSoap, maker of a UV light box to kill germs and recharge a cell phone, earned the award as the best overall presenter out of 42 teams.

For the seven BYU teams that competed in competitions around the country, the time they dedicated paid off. In addition to hard work, professors and students alike think that the students' unique experiences at BYU contributed to their successes this year.

According to management professor Tom Peterson, students say the principles taught by the entrepreneurship faculty led them to success. These principles require teams to validate their ideas with actual customer prospects and then adapt their business models based on the feedback they receive until they've arrived at a final model.

"The BYU teams have experience testing their business ideas and validating them because of the preparation process we put them through," says Peterson, a faculty adviser to many of the teams. "After they have repeatedly gathered information from their markets, they have much stronger convictions of what they are doing, and it comes through in their presentations. They are convincing because they have gone through the process."

From a student's perspective, Gonzalez says BYU teams are successful because they have members with varied experience. Gonzalez, also an organizer for BYU's Business Plan Competition, says they made a push to have students from outside the business school participate this year.

"We did a good job of bringing students together from varied colleges and disciplines," he says. "For example, product developers were partnering with the business students, which made the teams more effective."