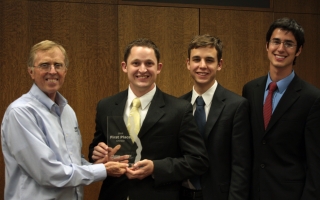 Eley, a member of BYU's first-place Chinese team, attributed the win to an understanding of both a country's business culture as well as language proficiency.

The BYU-hosted competition attracted 22 teams from 16 universities across the country, including the University of Washington, Purdue University and Vanderbilt University. Students were charged to analyze, present and negotiate their solutions to complex business cases provided two weeks prior. Teams competed in either Chinese, Portuguese or Spanish.

This year's competition, which was also sponsored by Michigan State University and University of Miami, saw its largest number of entries, with more than half of participants competing in the Spanish section.

Diego Flores, a Spanish-section judge from Quito, Ecuador, was particularly impressed with students' mastery of the business and linguistic aspects of the presentations and the students' ability to think on their feet.

"They have great minds, a very good understanding of business and also a skillful management of the language," Flores says. "Those who speak really well have a huge advantage in the competition. That's also true in the real world."

Sherstin Creamer, program coordinator at the Kay and Yvonne Whitmore Global Management Center, says language skills are the key to international business, and BYU students are opening many doors of opportunity with their second-language proficiencies.

"Students get stuck in the mindset that they can only use their language for translating. We want them to see the bigger picture," Creamer says. "Knowing a second language will open doors for networking and for building relationships that are not available to professionals who only speak English."