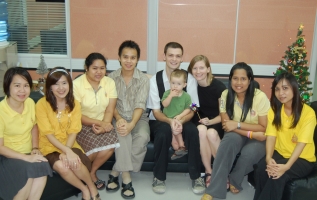 David Griffith, his wife Jade Grimmius and
their son Ezra (center) with the business department
staff at Chulalongkorn University in Bangkok, Thailand.PROVO, Utah – Jul 1, 2010 – Who says you can't have your cake and eat it too? One Marriott School of Management student is doing just that.

David Griffith, an MPA student, from Corvallis, Oregon, was chosen for the Boren Fellowship and the Fulbright U.S. Student Program. These two prestigious grants provide opportunities for students to increase their knowledge and experience of a foreign language and culture. To be selected for one program is an honor, but to be selected and fulfill both is extraordinary.

"As far as I understand, other people may have been selected for both the Boren Fellowship and the Fulbright U.S. Student Program, but I think it's very rare to be able to complete both," Griffith says.

This year more than 500 graduate students applied for the Boren Fellowship and ninety-nine students were selected. The Fulbright U.S. Student Program received more than 8,500 applications, with only 1,500 students chosen for the program.

Not only was it a feat to be chosen for both programs, but Griffith was faced with the challenge to fulfill both program requirements within the necessary time frame. He took action to ensure he would be able to complete both programs by proposing a revised plan to both sets of program administrators.

This June Griffith, his wife, and two sons traveled to Bangkok, Thailand, where he began the six-month Boren Fellowship. The purpose of the fellowship is to provide graduate students interested in working with the federal government an opportunity to study language and culture in countries of interest to United States national security. Griffith will begin applying his $15,500 grant toward a five-week intensive Thai language program at a local university. Upon completion of the course he will be working on addressing poverty through private sector initiatives as an intern for five months.

The Griffith family will head north to Laos in late February where Griffith will begin his ten month, $16,500 funded research project for the Fulbright U.S. Student Program. The goal of the program is to increase mutual understanding between United States citizens and people from around the world. Laos is a communist country where economic freedom has been permitted for less than ten years. Griffith will be researching the development, limitations, and barriers of small- to medium-sized businesses in Vientiane, the capital of Laos, and Luang Prabang, a rural World Heritage Site in northern Laos.

Catherine Cooper, associate director of the Romney Institute of Public Management and campus representative for the Boren Fellowship, says she has been amazed at Griffith's innovation to ensure he would be able to retain involvement with both programs.

"I read his Boren submission and thought, ‘Of course he'll be selected; this is perfect—he's pulled together all the requirements into a cohesive document,'" Cooper says. "Then after receiving the Boren and the Fulbright, David asked, ‘You've both offered me the award. Will you help me fulfill both?'"

Griffith believes his MPA degree, which he will resume and complete soon after his return to the United States, along with these experiences are stepping stones that will help lead to a promising career.

"It feels incredible to be extended this opportunity," Griffith says. "This is what I want to do with my life, and since many entry-level jobs require at least five years of international experience all this combined could open a lot of doors."