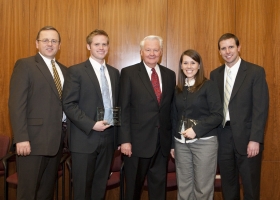 The Merrill J. Bateman Awards are given annually to students who serve and lead within the school and community and to faculty, staff or administrators who demonstrate outstanding efforts to enhance students' experiences.

For the Student Choice Award the vote was tied and two professors were honored — Monte Swain, professor of accountancy, and John Bingham, assistant professor of organizational leadership and strategy.

"Both faculty recipients were student oriented, and in addition to being excellent student mentors, it was apparent that they were well respected in their individual disciplines," says Merrill J. Bateman, who delivered a keynote address at the March 18 awards ceremony. 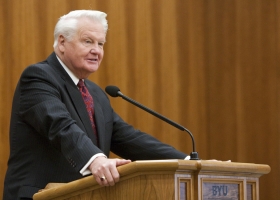 "Each student nominee was academically qualified to receive the award, but what impressed me was the service orientation of each candidate," Bateman says.

Service was certainly a top priority for Anderson. As president of the BYU Marketing Association, he led an effort to revamp the club and offer more valuable activities for students, such as online marketing workshops and several case competitions. Thanks to his efforts, club membership went from about 30 students to 150.

In addition to his role in the Marketing Association, Anderson juggles an online marketing internship, a part-time position as a research assistant, church service and weekly youth mentoring.

"I have found so much joy from serving in the Marriott School, and receiving this award makes me feel that I was able to make a real impact and help students," Anderson says.

Johnson has also been actively involved in service. She has served as vice president of the MPA Association and currently acts as co-president of Net Impact, a graduate student organization that focuses on socially responsible business, and serves as a member of the board of directors for Grantwell, a philanthropic organization affiliated with the Marriott School.

After she graduates, Johnson plans to pursue a career in university administration.

"I want to connect with students wherever I go," she says.

At the ceremony, presenters shared comments from students, who praised Swain and Bingham for genuinely showing interest in their students' lives and making the classroom experience more meaningful.

"Professor Swain holds informal open-door meetings twice a week where anybody can come in and talk about anything, from accounting-related material to career decisions to personal problems," one student noted. "He shows an unusual amount of dedication to his students' learning."

As for Bingham, students expressed appreciation for his passion for the subject and his ability to engage students.

"Teaching students in the Marriott School is something I do not take lightly," Bingham says. "It is a real honor to know that students feel that the mutual learning experience between us as professor and students has been worthwhile and even valuable."

The Merrill J. Bateman Awards were created in 2002 in honor of Bateman, who served as president of BYU from 1996 to 2003 and as dean of the BYU School of Management from 1975 to 1979, before it was named the Marriott School. He has held several prominent positions in The Church of Jesus Christ of Latter-day Saints and now serves as president of the Provo Utah Temple.

The Marriott School is located at Brigham Young University, the largest privately owned, church-sponsored university in the United States. The school has nationally recognized programs in accounting, business management, public management, information systems, entrepreneurship, and recreation management and youth leadership. The school's mission is to prepare men and women of faith, character and professional ability for positions of leadership throughout the world. Approximately 3,300 students are enrolled in the Marriott School's graduate and undergraduate programs.