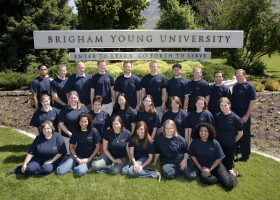 PROVO, Utah — Jul 20, 2005 — Ask Francine Giani what she has learned over the past 15 years, and she is likely to jump into discussing graduate courses on budgeting and planning. That’s not typical fare coming from a forty-five-year-old married mother of two, but this month Giani was tapped to be the new executive director of the Utah Department of Commerce.

Though Giani isn’t new to public service, the move will require her to oversee a larger part of Utah’s government, something she says her Master in Public Administration degree from Brigham Young University will help.

Before graduating with her MPA in 1991, Giani worked as press secretary and policy adviser to then Governor Norman Bangerter. However, Giani said to herself that “I should give the MPA a shot.” The program’s biggest plus, she says, is “the fact that you had a variety of people who had worked in the field.” Now she will oversee 260 people and a $22 million budget.

Giani is just one of roughly 2,500 grads from BYU’s George W. Romney Institute of Public Management. The program, which celebrates its 40th graduating class this year, was one of the first accredited by the National Association of Schools of Public Affairs and Administration, making it one of the oldest programs in the country.

Stewart L. Grow, the program’s founder, emphasized the importance of acquiring knowledge to better serve mankind. That emphasis continues today. The program, part of BYU’s Marriott School, blends policy theory with practical management skills. Even the university adopted Grow’s slogan, “Enter to learn, go forth to serve,” in 1965 and displays it at the campus’ west entrance.

The program’s graduates currently work in 48 states and some 25 countries. “These alumni represent the real strength of the Romney Institute,” says Gary Cornia, director of the Romney Institute. “They are the ones who on a daily basis work to improve the lives of citizens and organizations. They are the example for the next 40 years of students who will enter to learn and go forth to serve.”

The institute was named in 1998 for the late three-term governor of Michigan, George W. Romney, who was known as the father of volunteerism in America. Romney also served as the U.S. Secretary of Housing and Urban Development and as president of American Motors. The Romney Institute combines BYU’s vision with Romney’s legacy of public service, volunteerism, and the highest standards of personal integrity.

Helping to instill that same spirit of public service in students is no small feat. To do that, faculty members tap into their backgrounds of city management, taxation, community development, banking, survey research, legislative staff work, international development and management consulting. That’s something Giani remembers fondly – working with “instructors who had the experience.” Romney faculty have trained city managers in Bangkok, Thailand; taught infrastructure finance in Taiwan; chaired the U.S. National Task Force on Telecommunications Taxation; and pioneered the Journal of Microfinance, the only practitioner and academic journal to deal exclusively with the microfinance movement.

The Romney Institute of Public Management offers a master’s degree in public administration through both pre-service and executive programs. The program has a long tradition of preparing young people for careers in public service and is dedicated to educating men and women of faith, character and professional ability who will become outstanding managers and leaders in public and not-for-profit institutions. Brigham Young University is the largest privately owned, church-sponsored university in the United States.