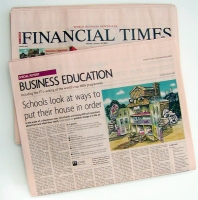 PROVO, Utah — Jan 21, 2003 — The Financial Times of London advanced Brigham Young University's Marriott School for the second consecutive year in the paper's global ranking of top 100 MBA programs. The Marriott School ranked 51st this year compared to 63rd in 2002 and 75th in 2001.

In addition to the overall ranking, the school's alumni placed its finance program among the top 10 worldwide. The Marriott School also placed among the top 10 in North America for salary percentage increase—calculated from students' salaries at the beginning of the MBA to three years after graduation, computed as a weighted average of responses from the 2001, 2002, and 2003 surveys.

"We're pleased with the recognition that BYU and the Marriott School continue to receive from the Financial Times and other prominent business school rankings," said Merrill J. Bateman, BYU president. "The recognition is evidence of the school’s strong academics and our graduates' ability to add value to companies and organizations around the world."

This is the fifth year the Financial Times has ranked business schools. The paper's criteria measure a school's strength in three areas—purchasing power in the marketplace, diversity of experience and the school's research qualities. The rankings are compiled from two questionnaires and an independent assessment of research. One questionnaire was completed by alumni who graduated three years ago in 1999. A second questionnaire was completed by each school. The paper evaluated business schools on six continents for its 2003 MBA rankings published 20 January.

"One of the greatest attractions to recruiters is the high caliber of our students and their unique international perspective," said Ned C. Hill, Marriott School dean. "We also attribute our success to wonderful alumni who stepped up their support and help with placement in a difficult economy."

The Marriott School is located at Brigham Young University, the largest privately owned, church-sponsored university in the United States. The school has nationally recognized programs in accounting, business management, public management, information systems, organizational behavior and entrepreneurship. The school's mission is to prepare men and women of faith, character and professional ability for positions of leadership throughout the world. Approximately 3,000 students are enrolled at the Marriott School's graduate and undergraduate programs.