MPA Student is First in Utah to Win ACHE Scholarship 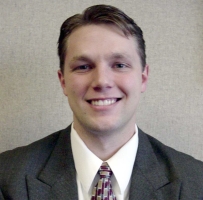 PROVO, Utah — Jan 08, 2003 — A Master of Public Administration (MPA) student at Brigham Young University’s Marriott School is the first person in Utah to win an American College of Healthcare Executives scholarship since the fund was started in 1969.

Ryan J. Lambert, BYU ACHE student chapter vice president, received the Foster G. McGaw national scholarship. “Being the vice president of the BYU chapter really improved my chances to win this award,” Lambert said. Of the 3,500 students affiliated with the ACHE, fewer than 20 awards were given in the U.S. and Canada during the past two years.

"We’re very pleased with the honor that Ryan has received, since the ACHE scholarship is a very competitive national award,” says Robert Parsons, chair of the school’s Romney Institute of Public Management. “Ryan is a serious student, hard working, conscientious and very deserving of this scholarship award."

Besides relieving some financial stress for Lambert and his wife, this scholarship has provided him with other opportunities. “I listed the award on my resume and it has helped me get some job interviews that I may not have,” Lambert said. He was also chosen to be on Utah’s ACHE Regent’s Advisory Council, the governing body for ACHE in Utah. The board includes 15 healthcare executives and three students. They discuss issues related to Utah health, the ACHE, and healthcare management.

Lambert became interested in the organization after shadowing an alumnus as part of the Marriott School mentor program. The ACHE is an international professional society of nearly 30,000 healthcare executives. It is known for its prestigious education, research and public policy programs. The ACHE also publishes the Journal of Healthcare Management and Healthcare Executive.

The Marriott School is located at Brigham Young University, the largest privately owned, church-sponsored university in the United States. The school has nationally recognized programs in accounting, business management, public management, information systems, organizational behavior and entrepreneurship. The school’s mission is to prepare men and women of faith, character and professional ability for positions of leadership throughout the world. Approximately 3,000 students are enrolled at the Marriott School’s graduate and undergraduate programs.