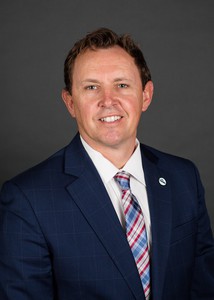 Ben Horsley was born and raised in South Davis County. He continues to raise his family there. Ben served a mission in the Texas Houston East and then South mission from 1996-1998. He completed a bachelor’s degree in 2004 from the University of Utah in Mass Communications with an emphasis on Public Relations.

Prior to the completion of his undergraduate work, Ben was heavily involved in political campaigns and eventually began working for Congressman Rob Bishop from 2002-2008. He continued to consult on a variety of political races. It was during this time that Ben found his true love of policy and communications and began pursuing a master’s degree in public administration. He earned his MPA degree in 2011.

While working on his master’s degree, he was hired as Communications Director for Granite School District in 2008. In the fall of 2021, Ben was promoted to Chief of Staff serving the superintendent of Granite School District and overseeing almost 10,000 employees. He works in conjunction with the Board of Education serving over 60,000 students and families as one of the largest school districts in the state and nation.

Ben has served as president of both the local chapter of the National School Public Relations Association and Utah Public Information Officer (PIO) Association. He enjoys presenting on crisis communications, community engagement, and customer service. From 2016 to 2019, he also spent time as a part-time adjunct, teaching ethics in the Business program at Brigham Young University.

He loves coaching baseball and camping with his family.