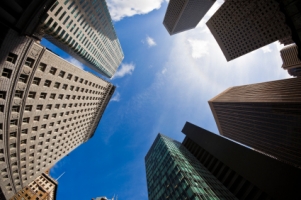 PROVO, Utah – Oct 28, 2011 – This year hundreds more Marriott School of Management graduates were hired than in 2010, resulting from an intensified focus on placement and a slowly recovering economy. Placement rates increased by 14 percent for graduate degrees and five percent for undergraduate degrees in 2011, reaching 91 percent and 76 percent, respectively.

The Marriott School's focus on helping students find careers is founded in its placement initiative, a $10 million endowment that is currently being established with the objective of overcoming BYU's geographic isolation in the Mountain West. The goal is to double the number of companies that students come in contact with by 2015, resulting in the consistent placement of 90 percent of students within three months of graduation and an increase in the number of job offers each student receives.

"BYU students are phenomenal, but they're not well-known in some areas of the country," says Jim Engebretsen, assistant dean for corporate relations. "Provo is more than 600 miles from most major employment centers, while many other business schools are located just a subway ride away from companies. We don't have that proximity, so we've got to get creative."

Engebretsen and a team of career services staff are working to facilitate the process of meeting with and interviewing employers. Their efforts also include increasing interview and résumé training for students, organizing trips for students to visit employers and marketing the Marriott School to companies.

"The background of our students — the intellectual power they bring, the maturity factor that comes with serving an LDS mission or being married — can make them very interesting to prospective employers," says Gary Cornia, dean of the Marriott School.

Cornia explains the initiative grew from a recognized disparity between the school's placement process and its high-caliber students and faculty. One major factor in increasing the quality of the placement process is organizing and subsidizing company visits for students. A standard practice among business schools, company visits subsidized by the initiative will allow for hundreds of students to network in major hiring hubs such as San Francisco, New York City and Dallas.

Austin Boaz graduated in 2011 with a bachelor's in accountancy and took several trips to New York City while studying at BYU. As a result of his visits, Boaz was hired in 2010 for a summer job by Lazard Ltd., an investment bank in New York City. After Boaz graduated, Lazard offered him a full-time position and later returned to BYU to hire two more students.

As graduates make connections and are hired, Cornia says another goal of the initiative is to make BYU a strategic recruiting school. As a strategic school, BYU would be one of the five or six schools that a company turns to when it is time to hire. Maintaining relationships with companies is crucial to this goal, as are the reputations of Marriott School graduates.

"Our graduates are our best marketing tool," says Engebretsen. "Oftentimes just one graduate has opened opportunities for many students to follow."

The effects of the recession have made it difficult for college graduates around the nation to find employment, but Cornia says the placement initiative has been an important factor in raising job placement after a dip during the recession. The Marriott School has a higher placement rate than most schools in the nation and with the new efforts to help graduates find jobs, Cornia says he is sure they will succeed.

"We have great students," he says. "With the initiative we're helping the world to see their quality."