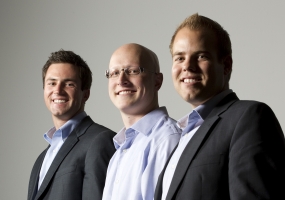 Marriott School of Management student Brad Cahoon realized he was paying too much for his favorite cereal simply because he didn't know when it was on sale. This dilemma led him to create Kalood, a company that hopes to use its innovative social deal platform to revolutionize how consumers receive bargains and shop. The idea has already had great success, as Cahoon and his team won first place and $50,000 in prizes at the 2011 Brigham Young University Business Plan Competition.

"Consumers don't always know about a deal," Cahoon says. "There are a lot of deal sites popping up, but they often offer deals that are irrelevant to consumers."

Kalood allows users to rate potential bargains and receive texts when their favorite products go on sale, while simultaneously allowing merchants to receive data telling them who is interested in their products. The company has already earned many accolades, including placing first in the BYU Speed Pitch Competition and second in the BYU Business Model Competition, as well as receiving awards in business plan competitions at the University of Nebraska, the University of Cincinnati and Wake Forest University. The Kalood team consists of Cahoon, a senior in entrepreneurship from Newbury Park, Calif.; Neal Watterson, a senior strategy major from Charlotte, North Carolina; and Matt Smith, a computer science PhD candidate from Lehi, Utah.

In the end the first- and second-place winners were separated by less than two percent of the vote. "All three finalists have different niches in the social space," says TJ Davis, BPC student director. "They competed against each other very well because they all have compelling businesses."

Second place and $30,000 in prizes went to QR Code City, an online application that links customers and merchants through smart phone scans of quick response codes. Their mobile application has already grossed more than 175,000 downloads in 20 countries.

Social media marketing venture AdViral won third place and $20,000 in prizes, as well as an additional $6,000 in the technology category. AdViral uses customers' Facebook profiles to spread advertisements about entertainment and events to their friends.

Thirty business plans were submitted in the BPC's first round. Those plans were narrowed to the three finalists, who were judged by a panel of successful entrepreneurs from the Rollins Center for Entrepreneurship and Technology on a variety of business aspects including product quality, marketing strategy, management and finances.

Social venture Tilapiana received $5,000 from the Kay and Yvonne Whitmore Global Management Center in the international business category. Tilapiana uses a franchise model to operate fish farms in Africa in an effort to decrease poverty and malnourishment.

Founded in 1993, the Business Plan Competition is sponsored by the Rollins Center for Entrepreneurship and Technology. The annual event, run by a leadership team of eight MBA students, an undergraduate business student and a faculty adviser, is recognized as one of the top-tier business plan competitions in the nation in terms of prizes and participation. Winners from past BYU competitions include Xeromax, Klymit, Calle, 1-800-CONTACTS, uSight, Property Solutions and Alianza.