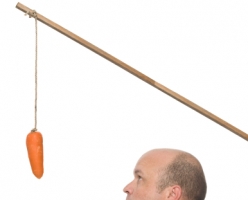 PROVO, Utah – Mar 15, 2010 – The wisdom of the ages sets forth two ways to make a donkey walk forward: hit its backside with a stick, or dangle a carrot in front of it. Consumer activists tend to use sticks, such as lawsuits, protests and boycotts, to persuade companies to be socially responsible. But as part of a new internship program, five students at Brigham Young University decided to experiment with carrots —mobs of them.

The students were participating in the Students for Social Entrepreneurship internship program, which was launched last September. Throughout fall semester, they worked with an organization called Carrotmob, which promotes a positive approach to consumer activism.

The idea is simple. Carrotmob organizers advertise a special event to draw in a "mob" of customers to a participating business. In turn, the business commits to use a percentage of profits from the event to make its operations more sustainable. Everybody wins: the business gets its carrots — customers willing to spend their cash — and the customers get their donkey to move forward with more sustainable operations.

"Carrotmob is successful because you're not really changing consumer behavior, you're just organizing it," explains Blake Nuttall, a senior entrepreneurship major from Yorba Linda, Calif., who recently completed his internship with Carrotmob. "We're not asking people to buy solar panels; we're taking something they'd buy anyway and asking them to buy it from a business that is socially responsible."

Nuttall and his fellow interns approached about two dozen local restaurants asking them to bid on what percentage of profits they would commit, with the winning bid coming from Pastorero Taco Grill. Pastorero offered to use 59 percent of its profits to make a variety of changes, such as switching to biodegradable utensils.

The interns ensured that the community was aware of the event by working with local media and social networking, offering a lineup of local bands and of course, telling all their friends. Their efforts paid off; according to Nuttall, the event brought in about 300 people to the small restaurant and produced a 40 percent increase in revenue. The restaurant has not yet calculated a long-term change in revenue, as only a few months have passed since the event, but Nuttall says the carrotmob definitely had a positive impact.

"Most of the people who came to the restaurant that night had never been there before," he says. "Pastorero's owner is very enthusiastic about becoming more sustainable, and I'm glad we were able to attract more customers to a business that wants to do good."

In addition to benefiting the restaurant, the Carrotmob project has also provided value to students. Unlike most internship opportunities with social enterprises, the Students for Social Entrepreneurship internship program allows students to work on unique projects like the Carrotmob without leaving Provo.

Perhaps most importantly, students learn how to apply principles of social entrepreneurship in their own communities. Even after the internship has come to a close, Nuttall continues to meet with the manager of Pastorero to help him improve his business practices and decide on the best way to use his carrotmob revenue.

"It's been inspiring to see the students continue to grow and find ways to use their skills," says Misty Lefrandt, a senior family finance major from Provo and co-president of Students for Social Entrepreneurship. Lefrandt created the group with her husband, Curtis, a senior business management major from Aiea, Hawaii, early last year.

With the support of the Economic Self-Reliance Center and a grant from the Peery Foundation, the two have been able to foster an internship program that so far has provided about 60 students with valuable experience working for organizations like Kiva, Teach for America, Unitus and Ashoka.

"A lot of people associate doing good with volunteerism, nonprofits or one-time humanitarian trips," says Misty Lefrandt. "We hope these internships will show students that they can take their skills and interests, whatever they are, and use them to make a difference and make a living."

The Marriott School is located at Brigham Young University, the largest privately owned, church-sponsored university in the United States. The school has nationally recognized programs in accounting, business management, public management, information systems, entrepreneurship, and recreation management and youth leadership. The school's mission is to prepare men and women of faith, character and professional ability for positions of leadership throughout the world. Approximately 3,300 students are enrolled in the Marriott School's graduate and undergraduate programs.