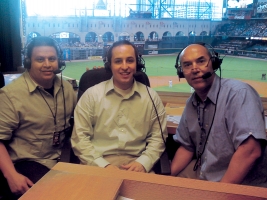 Finance student Chris Bernal sits in the press
box with two announcers in Minute Maid Park
during part of his internship with the Houston Astros. PROVO, Utah – Sep 11, 2009 – It's a dog-eat-dog world out there, and many college students wonder how they'll survive in an increasingly competitive job market. But this summer, hundreds of students at Brigham Young University's Marriott School of Management equipped themselves with skills to get ahead by interning for some of the biggest names in business.

"Internships are crucial for students in the business school," says Kristen McGregor, managing director of the school's undergraduate programs. "They give students hands-on experiences to apply what they're learning in the classroom."

In fact, 95 percent of employers say practical experience plays an important role in hiring, according to a survey by the National Association of Colleges and Employers. Here's just a small sampling of what Marriott School students did this summer to get ahead of the game.

For Jim Ogilvie, a first-year MAcc student from Cottonwood Heights, Utah, gaining real-world experience required a longer commute than most. He started each week by boarding a plane and didn't arrive home until Friday or Saturday.

Ogilvie spent his summer with Savage Services, a transportation logistics company with more than 100 locations in North America. The company sent him all over the United States and Canada to perform internal audits of manager's accounting records throughout Savage's operations. And because Ogilvie is doing the traveling, the company doesn't have to take full-time employees away from home.

"This internship was incredible not only because I saw the entire United States but also because of the experience," Ogilvie says. "I know I'm doing meaningful work; I'm not just part of a long recruiting event."

Computer tips — from a finance student?

To win an internship at Merrill Lynch, Thomas Howard, a junior finance student from Fresno, Calif., knew he needed to stand out among the crowd; the firm had 4,500 internship applicants last year. To get ahead of the competition, Howard contacted a friend at the company who helped set up an interview with the friend's supervisor.

"While I was at the interview, the supervisor mentioned a problem he was having managing his clients and I gave my ideas on how to solve the problem," Howard says. "His next words were, ‘You're hired.'"

For one of his first assignments, Howard built a system to track and keep in touch with clients, solving the problem explained in the interview. That task would normally be left to an IT expert, not a finance student. But Howard built the system using components learned in his Information Systems 201 class, a required course for all management majors at the Marriott School.

"It was a satisfying experience because my system solved a problem that the office had been having for years," Howard says.

Landing an internship at one of the computer industry's trendiest companies takes more than just computer savvy. Devin Collier, a senior information systems student from Provo and longtime fan of Apple products, learned that perseverance is the key ingredient.

"When they first came on campus, I tried to get to know each recruiter," Collier explains. "Scoring any position at Apple requires a lot of persistence and keeping open communication."

While company policy requires him to remain tight-lipped on project specifics, Collier can say the twelve-week internship provided amazing opportunities in software development, testing and implementation.

As for the company's culture, Collier says it's just as hip as it's made out to be.

"Apple has been an excellent company to work for," he says. "The executives strive to ensure that bureaucracy doesn't get in the way of creative ideas and innovation."

From Arizona to Indonesia

Understanding the increasingly global economy first-hand is crucial to many students' internships. Second-year MBA students Aaron Nielson from Mesa, Ariz., and Joseph Knight from Phoenix had a chance to experience business abroad while working with ExxonMobil in Jakarta, Indonesia. The two worked on budgets and financial reports for the international business powerhouse's Upstream Business Services division.

Although the internship required sacrifice — the two received no salary and had to leave their wives and children at home — Nielson says the experience was well worth it.

"In the current economic climate to have landed a solid internship is an enormous blessing," he says. "The purpose of an internship is to work and learn, and the chance to work internationally for the top Fortune 500 company is payment enough in my mind."

Take me out to the ballgame

Nearly 75 percent of Marriott School students speak a second language, a skill that landed Chris Bernal a homerun of an internship. After searching every MLB team's Web site for listings, he struck it big with the Houston Astros.

"I absolutely love sports, especially baseball," says Bernal, a senior studying finance from Grand Junction, Colo. "It's a competitive industry and will take many sacrifices, but any job requires sacrifice."

As the market development intern, Bernal focused his efforts on Hispanic media and marketing. His duties, which included player interviews, Web site content, game recaps, corporate sponsor visits and even helping with the draft, allowed Bernal to combine his education at the Marriott School and Spanish fluency to contribute to the organization and build team support.

Bringing it all home

As these and other students return from their internships, McGregor says students make an impact in both the workplace and the classroom.

"Internships do more than make students competitive in the job market," she says. "Interns bring back a new level of experience and wisdom they can share with their peers, improving the educational process for years to come."