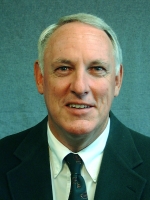 Accounting Professor Boyd Randall.PROVO, Utah – Aug 21, 2009 – Anyone who has completed a tax return knows that complex rules can make filing a headache, but one Brigham Young University professor has been working overtime to clarify Utah's tax laws and ensure the state gets its share from out of state businesses.

"This legislation ... makes substantial improvements to Utah's tax code that will benefit the state for years to come," said Keith Prescott and David Crapo, chair and vice chair, respectively, of the Utah Tax Review Commission, in a letter to Randall.

According to Prescott, Randall was an important member of the team as the only college professor on a task force consisting primarily of accountants and tax attorneys. He made painstaking efforts to ensure that everything was correct and provided valuable insight into the theory behind the legislation.

The updated rules, enacted in March, allow the state to accurately tax organizations that do business in Utah. Previously, companies based in other states could avoid paying Utah taxes on money made in the state by using a pass-through entity, a legal concept used to process income and assets. This legislation closes the loophole by requiring these entities to withhold taxes from income originating in Utah.

The law also caught the eye of Patrick Smith, a senior manager at Ernst and Young's Washington, D.C., office. Smith, who tracks legislation in all 50 states, says the new Utah law provides a great deal of clarity about when a pass-through entity needs to file or withhold taxes.

Smith notes that this kind of taxation can become very complex. Corporations and partnerships often form part of a highly tiered structure, with one entity holding another in a complex web of ownership.

"The legislation does a very thorough job of surveying what the universe of issues might be and addresses them," he says. "Clearly the tax commission did a lot of research to see what issues other states have run in to and tried to pre-empt them on the front end."

Although his pro bono work required him to donate hundreds of hours of free time, Randall says working on the legislation was rewarding in its own way.

"I'm just trying to fulfill my civic duty," he says. "There are rewards in seeing you've done something good for the state and knowing you've made a difference."