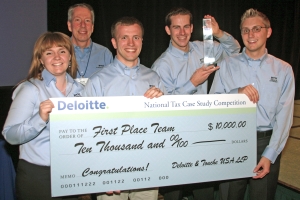 "We were pleased to see the skill that each team brought to the competition this year," says Shaun Budnik, president of the Deloitte Foundation and Deloitte partner.  "These students represent the future of the tax profession and demonstrate that they are up to the challenge of learning, understanding and applying their knowledge of complex tax codes to solve real-world issues in the professional environment."

Each team explored a hypothetical tax case study outlining a scenario common to tax professionals in the workforce today. The teams were given five hours to review the case with the assistance of the IRS tax codes and regulations. Their solutions were presented to a panel of judges who selected BYU's solution as the most outstanding. As the first place winner, the team received a $10,000 school award and each team member received a $2,000 scholarship. As a national finalist, the undergraduate team received a $2,500 school award and $500 for each student.

"BYU's success at the competition is a reflection of their individual preparation and on the overall quality of the tax program in the BYU School of Accountancy," says Ron Worsham, associate accounting professor and graduate team adviser.

The BYU teams competed in the regional level of the competition along with 60 other teams in October. After excelling at the regional competition, BYU's undergraduate and graduate teams were selected to be among the 12 teams to compete nationally. BYU has traditionally done very well in the past 17 years, most recently placing first in the undergraduate division and second in the graduate division.

"We were successful as a team because we fulfilled our individual roles and supported each other," Pergler says. "This competition was a great practical application of the tax concepts we've learned at BYU."