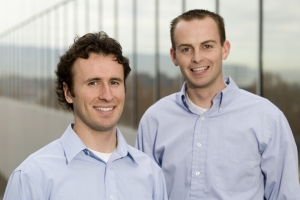 BYU has taken first place two out of the three years it has participated in the competition. Beating out more than 19 participating universities from across the nation, this year’s BYU team is composed of Brooks Tingey, a junior finance major from Sandy, Utah, and Casey Zaugg, a senior accounting major from West Jordan, Utah.

“It was very apparent that the overall academic preparation in the business major gave our team a decided advantage,” says David Hart, team advisor and associate professor of ethics and public management. “This was a very impressive team, and they worked really hard in preparing a solution to the case.”

As part of the competition, teams took on the role of managing executives for Outdoor Adventure Systems, a fictitious company producing eco-friendly equipment for outdoor sports. Due to growing competition in the industry, the company decided last year to use synthetic mass-produced materials and stray from its eco-friendly mission. As the company was making changes to maintain profits, top management continued receiving compensation packages that included golf memberships, financial and estate planning and tax services. In response for the new direction of the company and the overcompensation of employees, shareholders requested the board of directors to implement specific changes to its policies. These requests included modifying employee compensation, disclosing related-party transactions and the elimination of executive prerequisites.

The ethical dilemma of the case was deciding how to implement stakeholders’ changes while maintaining employee satisfaction. For the two weeks before the competition, the BYU team researched the industry and weighed shareholders’ requests while analyzing the company’s future business strategy.

“Instead of continuing to provide employees with benefits like golf club membership discounts, we designed a strategy for the company to offer programs that would be tax deferred,” Tingey says. “We would meet the demands of stakeholders by providing a different form of benefits for the employees.”

As part of the case strategy, other shareholders’ requests concerning related party transactions and the elimination of executive prerequisites were not employed. In response, the team suggested the implementation of efficient modes of communication between the shareholders and the company.

“It is very interesting to see strategy mingled with an ethical dilemma,” Tingey says. “It would not have been realistic to give in to every single demand in the case, but we wanted to acknowledge shareholders’ suggestions.”

Strategizing the company’s response to these simulated requests provided an opportunity for the team to understand how ethical dilemmas are addressed in real-life situations.

“The competition made me realize that Marriott School students have something to offer companies when we graduate,” Tingey says. “Knowing this gave me confidence for the future.”