Lunch with a Billionaire 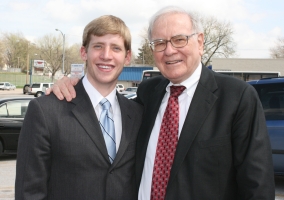 But on March 30 Davis had just that opportunity. As one of 70 BYU participants, Davis, an investment student from Plano, Texas, attended a Q&A session and lunched with the famed “Oracle of Omaha,” an opportunity Buffett has extended to 35 universities during the 2006-2007 school year.

“We got to talk about everything from business to integrity and teaching family values,” Davis says. “Although you can only teach so much in a couple of hours, it was very valuable to see what principles help lead to success.”

Charity lunches with Warren Buffett have sold on eBay for more than $600,000, an amount that eBay representatives report is the second highest for a charity item sold on the site. However, when BYU students were invited to meet with Buffett, all they had to do was schedule the flight.

“Warren Buffett only does this for students,” says Amy Beck, corporate relations assistant for the Marriott School of Management. “This year we were paired with the University of Washington and were able to bring our investment students as well as some of our economics and accounting students.”

“It was a fascinating opportunity to dive into the mind of one of the world’s most prominent individuals and to hear about his approach to life and the financial world,” says senior James Pierce, a finance major from Pleasant Grove. “He is charismatic and portrays a unique combination of success and passion for what he does.”

While some might let a title like one of the world’s richest people influence how they act, Buffett says this is one of the biggest misconceptions about him.

“People have a stereotype that because you’re rich, you’re different — it’s hard not to see the money sign,” Buffett said in the Q&A session. “I get my enjoyment from the same things everyone else does; if your kids are turning out well, you’re doing alright.”

The Marriott School is located at Brigham Young University, the largest privately owned, church-sponsored university in the United States. The school has nationally ranked programs in accounting, business management, information systems, organizational behavior and entrepreneurship. The mission of the Marriott School is to educate men and women of faith, character and professional ability who will become outstanding managers and leaders throughout the world. Approximately 3,000 students are enrolled in the Marriott School’s graduate and undergraduate programs.